In stock
SKU
326149
Be the first to review this product 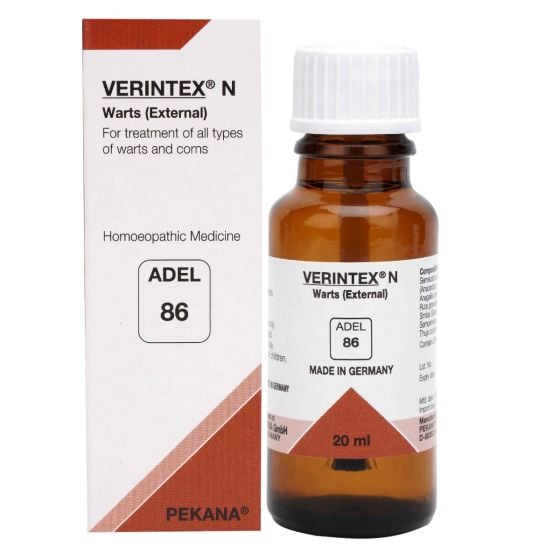 FOR TREATMENT OF ALL TYPES OF WARTS AND CORNS

INDICATIONS: For all forms of warts like juvenile, plantar, senile, “vulgar” warts and warts surrounding nails and corns

Anagallis arvensis is presented as an important component of this complex. It is recognized as a proven wart cure for external use and is known for its ability to soften flesh, where upon the effect of all the other compound ingredients can be achieved more easily. It is possible to use the drops even on problem areas of the body and on the face without causing harm.

Ruta graveolens, which is also used for ointments in biological medicine, is an effective remedy for the areas concerning ligaments, tendons, and muscles, in combination with circulation problems. Here, it clears the area of the more or less hyperkeratotic epidermic wart growths, which have been triggered by a viral infection.

Sarsaparilla is a known remedy against chronic skin rashes, warts, and genital warts that are due to a generally poor moisture status. Its broad range of applications within the scope of skin disorders, which includes tubercular eruptions to eczemas and further to psoriasis, also allow the substance to make a valuable contribution in a complex.

In regard to skin, Semecarpus anacardium, the homeopathic nerve remedy, is indicated as a suitable remedy against erysipelas, herpes, and wart growth, and perhaps the viral contamination is somehow linked to a pronounced neurasthenia, or an inactive intestinal situation, which ultimately leads to a toxic blood overload.

Sempervivum tectorum is an old and proven externally applied wart remedy. Due to its power to soften thickened calluses or dermal hardening, it has also been used for ages to treat hard tumors of the tongue and indurate breast cancer and other cirrhosed hardening of the glands. At the same time it has significant healing properties as a remedy against sores.

As a polycrest, Thuja has a total body effect and is probably the most popular and significant externally applied skin remedy against warts and genital warts.